It is essential to reduce the wasted machine cycles used for simulation workloads.

‘The 2018 Wilson Research Group ASIC and FPGA Functional Verification Study’ (requires free registration) reports that an ASIC, SoC or FPGA designer can spend up to 40% of the total verification time on creating testbenches, writing tests or running simulation. In addition up to 44% of the time spent on debug – and this involves running simulation too.
Simulation is the most dominant technique in the overall verification effort.

Simulation speed is losing the race against FPGA complexity.

Over the last decade, simulation software has improved at many levels. Simulation software needed these improvements so they would be able to cope with the increasing complexity of designing FPGAs and chips with hundreds of millions gates.

These efforts have improved the test coverage, provided metrics for signoff and standardized verification approaches based on simulation, but did not accelerate simulation that much. RTL simulation was accelerated by 4x or 5x thanks to the execution of the simulation on multi-core servers while the complexity of FPGA has been multiplied by 100 in the same period of time.

In 2018, 84% of FPGA designs had at least 1 non-trivial bug escape to production (source: The Wilson Research Group)

How to make the most of the simulation time

In the study mentioned above, The Wilson Research Group reports that a staggering 84% (!) of the FPGA designs have had at least 1 non-trivial bug escape to production – and that: 65% of the typical simulation times exceed 5 hours.

That is why it has become critical to make the most of the time spent in simulation, and limit – as much as it is possible – the wasted machine cycles. Otherwise, our verification techniques are at risk of becoming irrelevant.

The following approaches have proven to be successful:
– Performing ‘per IP’ simulations to verify them helps spread the effort on multiple engineers in parallel and run shorter simulations;
– Make use of ‘snapshot’ simulation features – which consists in saving the state of a simulation and re-start from there to run specific simulations.

In the illustration below, two frequent snapshots are saved – after the boot of the processor and after the DUT is initialized respectively. This conveniently helps running combinations of initialization sequences and test stimuli without having to simulate the boot sequence over and over again.

As demonstrated in this presentation from Cadence on simulation tools, full-chip bugs, which occur when the full system is put together, can require days of simulation. A ballpark estimate is up to 54 hours of simulation for 43 milliseconds of SoC HW runtime! For these kinds of bugs, it has become equally crucial to:
– Speed up simulation;
– Make sure that the simulated models are accurate;
– Provide additional visibility from the real system to converge faster on finding the bug;

What EXOSTIV can do to BOOST simulation.

Exostiv lets you record very long data sets from inside FPGAs running at full speed of operation.
Typical probing scenarios with their most common usages are summarized in the two tables below:
The first table lists common usages that boost simulation – illustrated below the table: 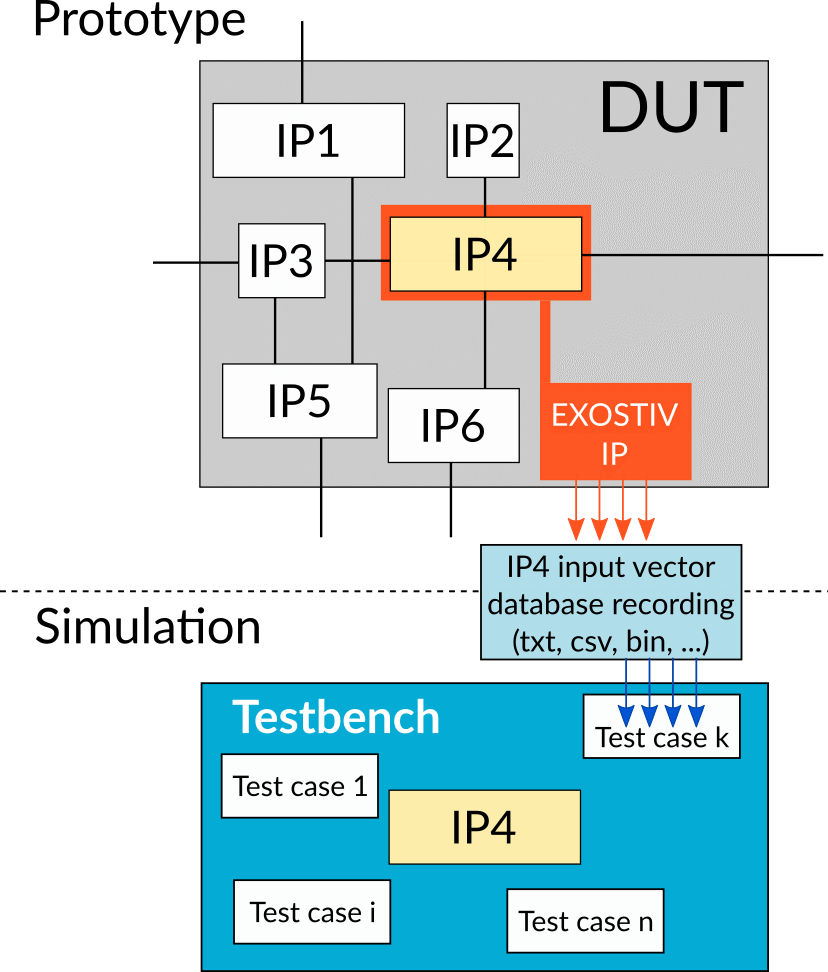 Other Exostiv usages that complement simulation: