Exostiv provides the following maximum capabilities for capturing data from inside FPGA running at speed:

Actually, we have built EXOSTIV to provide VISIBILITY to FPGA designers performing debugging with real hardware. If you do not know why it is important, watch the following 7 minutes video. It sketches out the fundamentals of EXOSTIV.

We built EXOSTIV to provide visibility to the FPGA designer.

Interrupted captures are very useful too !

I was recently demonstrating Exostiv at a customer’s site and I received the following comment:
“Even with 50 Gbps bandwidth, this tool is hardly usable because you won’t see many nodes at a usual FPGA internal sampling frequency…”
This person was implying that – for example – probing more than 250 FPGA nodes at 200 MHz already exceeds this total bandwidth. So, Exostiv cannot be used to its fullest, right?

This reasoning is right if you think that only continuous captures are valuable for getting insight from FPGA.
The following short video explains why it is important. It features a case where the capture – from start to end – spans over 11 seconds ! . Depending on the trigger and data qualification (or data filtering options) – and by using the full provided trace data buffer (8GB) such an approach can let you observe specific moments of the FPGA in operation over hours !.

With the proper capture settings, EXOSTIV lets you observe FPGA over hours.

So, the features listed below are equally important for an efficient capture work.

As always, thank you for reading (and for watching)
– Frederic

Footprint, ‘real estate’, resources, … No matter the design complexity, allocating resources to debugging is something you’ll worry about.
If you are reading these lines, it is likely that you have some interest in running some of your system debugging from a real hardware (Check this post if you do not know why it is important).

EXOSTIV enables you to get extended visibility out of running FPGA.
It impacts the target system resources in 2 ways:
– it requires logic, routing & storage resources from inside the target FPGA to place an IP used to reach internal FPGA nodes.
I’ll cover this aspect in a future post.

– it requires a physical connector to access the FPGA.
(- And NO, JTAG is not good enough because it does not support sufficiently large bandwidth – even with compression).

From there, a wider range of options is within reach if you consider using additional cables and board adapters available from Exostiv Labs or from third-party suppliers.

Which option will work for you? Follow the guidelines below:

1. Is there an existing SFP/SFP+/QSFP/QSP+ directly connected to the FPGA transceivers?

Note: most of the Dini Group’s boards feature SFP/SFP+, quad SFP/SFP+ or QSFP/QSFP+ connectors by default. And they are directly connected to FPGA transceivers.


2. Is there another type of connector directly connected to the FPGA transceivers?

Please contact us for details on our adapters, external references and custom adapters support.

3. For all other cases: you’ll need to modify your board and add a connector.

See picture below – this is an Artix-7 board equipped with a tiny micro-HDMI connector, providing up to 4 x 6.6 Gbps bandwidth for debugging FPGA.

EXOSTIV provides standard and custom connection options that enable fast deployment with standard FPGA development kits and/or limits the footprint requirements from the target FPGA board.

What are your ready to mobilize for FPGA debug?

What are you ready to mobilize?

I believe that there are 3 common misconceptions about debugging FPGA with the real hardware:

Misconception #1:
Debugging happens because the engineers are incompetent.

Misconception #3:
A single methodology should solve ALL the problems.

Debugging is part of the design process.

Forget about misconception #1. If the word ‘debugging’ hurts your eyes or your ears, call it ‘functional verification’, ‘functional coverage’, ‘corner case testing’ or perhaps ‘specification check’. Engineers can improve the techniques, methodologies and its competences. Engineers can seek ways to automate the verification process. It remains that verifying a design is at the heart of any engineering activity that presents some level of complexity. Electronic system design has become an incredibly complex task.

Even the best engineer does some verification.

Debugging does not happen over the air.

You need to reserve resources for debug.

It can be ‘hardware resources’– e.g.:

It can be ‘engineering resources’ – typically the time spent by the engineering team to find a bug with the chosen debugging strategy.

In all cases, the project budget is impacted with additional costs:
– the cost for an extra area on the PCB;
– the extra cost of an FPGA with a larger package or a higher speed grade;
– the cost of a new logic analyzer or a scope;
– the engineering hours cost for implementing a specific debugging strategy.
…

Engineers are assigned the task to optimize the cost of a design. Once the system goes to production, the extra money put in the system ‘real estate’ that does not participate to the system’s functionality is considered as wasted margin. Management constantly recalls that any such dollar is worth saving because it quickly multiplies once the system is produced in (large) series.

Hence ‘hardware engineers’ are naturally inclined to:
– save on hardware, and:
– do more ‘engineering’ (after all, we are engineers !)

Actually every stage of the design flow mobilizes resources.
What can be mobilized to do the job is essentially a trade off -or, if you prefer- a question of economics.

You must mobilize some of your ‘real estate’

In my previous post, I came to the conclusion that improving the FPGA debugging process would require providing much more visibility on the FPGA than the existing solutions. Mobilizing more FPGA I/Os or FPGA memory resources would likely not provide this increased visibility. Hence, a potential better solution would need to hit a ‘target position’ shown on the diagram below and now occupied with our EXOSTIV™ solution. 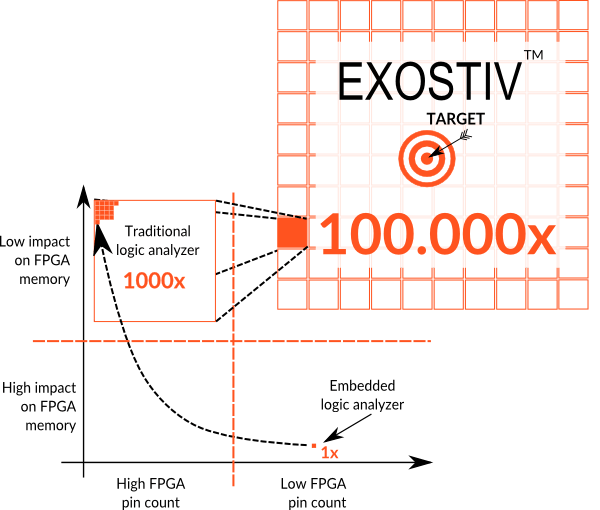 As one can expect, the above target requires mobilizing other resources than I/O or internal memory.
EXOSTIV™ mobilizes the following resources:
– An external memory of up to 8GB, thereby providing a total trace capacity 100.000 times bigger than existing embedded instrumentation solution.
– FPGA transceivers, used to send the data to the external memory.
– FPGA logic and FIFO resources used to reach the FPGA internal nodes and temporarily store the data trace. The footprint of this IP on the FPGA memory resources does not grow with the total captured trace.

Engineers commonly complaint about verification on hardware because it does not offer the same level of visibility as simulation. I believe that the secret to efficient debugging consists in finding the right mix of techniques.

What is the right mix for you? Well, the answer depends on the economics of your project.
But please bear in mind that going early to hardware is absolutely reachable economically when you work on a FPGA-based system.

Performing some of the verification steps with the target hardware has arguably at least 2 benefits:

1) Speed of execution is optimal – as the target system runs… at system speed – and:

2) The target hardware can be placed in its real environment and won’t suffer from incomplete modeling.

Perhaps the point is all about improving the debugging on hardware, not simply discard it because it does not do ‘everything’…

Debugging involves a mix of techniques

At Exostiv Labs, we believe that the engineering community is absolutely right when it chooses to use embedded instrumentation with live designs for debugging purposes. This is just a ‘part of the mix’. We also believe that debugging on FPGA hardware can be improved.

This is what we do with EXOSTIV™.